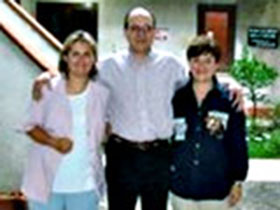 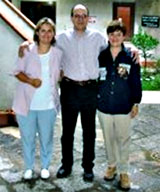 In the last week of September 2006, Adrienn Fritz Pásztiné came over to Italy from the Hungary office with a number of objectives planned.

She flew into Naples, where she met up Nick Broom, City & Guilds representative for the Campania region.

The first day was dedicated to visiting several of our approved centres in the region, and thus they called in at the British & American School in Torre del Greco, 2000 e lingue in Salerno, the SMCV Centre in S. Maria Capua Vetere, and back in Naples they saw Phil Sands of ICS.

They even had time to meet up with Fergal Kavanagh, our Quality Inspector based in Naples.

The following day involved a quality inspector training session given by Adrienn for new QIs, Valentina Dodge from Salerno and Phil Bragg from San Giovanni Valdarno, near Arezzo.

Adrienn gave a detailed explanation of the role and responsibilities of the quality inspector, while also giving some background information about City & Guilds in general.

While this meeting was taking place, our City & Guilds representative for North Italy, Calabria and Sicily, Rosalind Hunter was flying down from Milan to Naples.

She joined the end of the QI session, and then headed off by car with Adrienn down to Calabria, where they had a wonderful dinner with the owners of Europe Speaks English in Catanzaro, one of our approved centres in the region. The following day, Adrienn and Rosalind gave an IESOL interlocutor training workshop to all the relevant staff at the school, which was deemed a great success by all.

Many thanks to Adrienn from Rosalind and Nick for coming over to visit us.

Featured centre: The SMCV Centre, S. Maria Capua Vetere (Caserta) Tina and Mimmo Marcello have been running this school since 1990, and it has been a City & Guilds approved centre since March 2003.

Only just last year the school moved into stunning new premises in Via Latina in S. Maria Capua Vetere from their previous address in Via Gramsci.