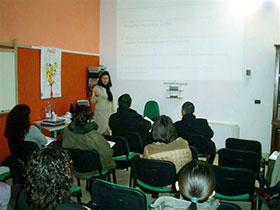 The 11 December 2007 as a City & Guilds Approved Centre, we organised a meeting for teachers of the public and private schools of the area, presenting an overview of City and Guilds Internationally IESOL/ISESOL examinations and the Common European Framework of Reference.

Professor Robert Hill was the Speaker, he has worked at the University of Cagliari, Verona and Milan and on projects with various IRRE and MPI, and has been involved in assessment and evaluation for over twenty years.

He has spoken at TESOL (Professional association with a mission to ensure excellence in English) conferences in Italy (the last November 2007 in Rome), Spain, Arabia, Korea, North & South America, and at IAFEFL conferences in many countries.